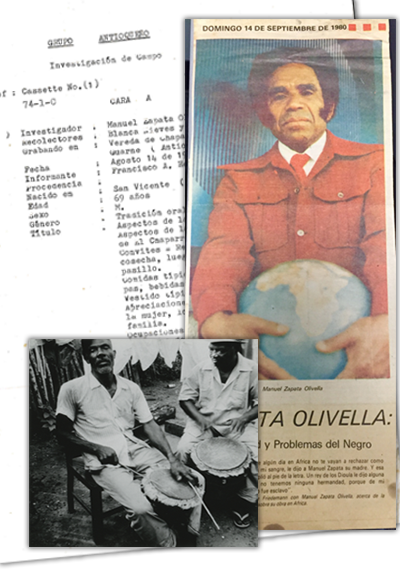 Manuel Zapata Olivella’s ethnographic collection (Grupo etnográfico) consists of audio and written transcripts of interviews with indigenous and Afro-Colombian groups, including many who were marginalized and living in remote areas. These interviews with ordinary Colombians were conducted by Zapata Olivella and a team of researchers in various regions from 1973 to 1975, and again in La Guajira province during 1985. They touch on a wide array of topics – from indigenous handicrafts to traditional medicine and popular religion, to gender,marriage and death rituals, and regional music, dance, and food. Library Dean’s Fellows have created an online exhibition consisting of essays designed to give an overview of the wide-ranging contents of these interviews. Links to selected interviews and documents also appear in the essays. The interviews have been digitized and are also searchable on this site. Essays by Tiago Fernandes Maranhão focus on gender dynamics among the Wayúu in the Guajira peninsula and issues of health and sanitation in Colombia.  Brad H. Wright discusses popular theater and Afro-Colombian identity in the 1970s, and surveys indigenous culture in La Guajira. Essay topics were chosen with a view to prevalent and representative themes in the interviews. These can serve as entry points into the Grupo etnográfico, a collection that illuminates Colombia’s cultural diversity and regional distinctions.