Hygiene and Sanitation in Colombia 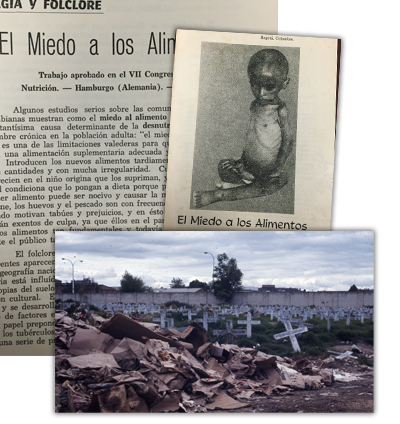 Peasants and indigenous people who consumed an ancient drink called chicha (D-85-8-C) were defined as having a social illness that had to be extirpated. Hygienists argued against the use of traditional medicine.  Their campaign against the consumption of chicha was only one example.  They blended scientific, moral, political, and economic arguments to support such theories during the first half of the twentieth century in Colombia.[2]

Manuel Zapata Olivella saw the world through the lens of anthropology, which he viewed as the most important science for connecting the people to national health policies.  He argued that sanitary education should not be limited to teaching concepts relating to good physical health.  For him, it was essential that educators learn about the material and cultural environment of communities where they would work. Zapata Olivella believed that the educator, the householder, and community leaders should all expand their knowledge of health and sanitation by learning both regional and cultural differences in the nation.[3]

Throughout the first half of the twentieth century, the Colombian state adopted the "hygienist model," which understood health and disease as direct results of environmental conditions.[4]  Therefore, the solution was believed to be in the adoption and implementation of policies to improve hygienic conditions.  With the creation of the Ministry of Health in 1946, the Colombian government entered into a cooperative program of the Pan American Union through its Office of Inter-American Affairs (OIAA), thus tying its practices to the U.S.  The Colombian Ministry of Health created the Servicio Cooperativo Interamericano de Salud Pública, which influenced national policy decisions relating to public health and hygiene; another example of what happened throughout Latin America.[5]

Thus, Zapata Olivella understood anthropology as the basic auxiliary science for health education (6).  He noted the need to add cultural components to the curriculum of health educators and those responsible for sanitation measures.  He believed that without the knowledge of local realities, all work would be reduced to a theoretical framework and would be counterproductive.  Zapata Olivella based his precepts on the work of American anthropologist Clyde Kluckhohn, who thought anthropology was essential in order to teach new health initiatives in communities.[6]  New hygienic practices, Zapata Olivella asserted, do not arise randomly from the mind of the educator.  Instead, they should respond directly to local conditions.  People will not adopt new practices without understanding that their own cultural conditions are not facilitating improved health conditions.  An understanding of hygienic behaviors within each culture would lead to improved practices.[7]

Zapata Olivella believed that the development process would be more traumatizing in rural areas, where there was a higher illiteracy rate, with fewer economic resources and a more tradition-bound society.[8]  He concluded that a single health education policy for the whole country was inadequate for Colombia.  There should be as many health policies as needed to protect and improve the populace, whether in the cities, suburbs, or rural areas.  He noted the important example of the Wayúu (Guajiro) and their traditional use of medicine (D-85-13-C).  It was necessary to understand that Colombian society was in the process of development, and therefore, its policies should be adjusted to local cultural patterns, each with differing goals.  To Zapata Olivella, it would be inappropriate to apply hygienic guidelines from foreign textbooks—particular products of foreign experiences—without taking into consideration that such practices normally related to developed nations with different mentalities and circumstances.

Government, hygienists, and educators must not ignore the contradictions and local differences in any health campaign. Zapata Olivella believed that underestimating local and regional factors could cause good health programs to fail.  As one interviewee stated about non-exemplary government employees, “they go to the cities to collect their salary, no educator or inspector representing the mayors is going to see the inspections, and then the people continue to lose confidence in the government of this department”.[9](D-85-18-C)

Influenced by American anthropologist and sanitarian Isabel Kelly,[10] Manuel Zapata Olivella recommended studies on the culture of the communities prior to implementing any health programs in Colombia.  He believed this approach would avoid unnecessary conflict with local cultures, would teach physicians how to take advantage of particular aspects of each local group, and would offer the possibility of seeking health and hygiene solutions within the cultural reality of each community.

The work of Manuel Zapata Olivella points to new perspectives for understanding all of these processes and experiences, and their interrelations with varied Colombian ethnic groups and regional differences.  For Zapata Olivella, it was imperative to understand the differences in cultural diffusion in order to implement appropriate institutional policies.  Considering Colombia’s great diversity both regionally and ethnically, this foundational understanding would be key to implementing a multidimensional, successful health policy.

[3] Formal links between the United States and health organizations in Latin America began officially in 1880, when the US Congress authorized holding the Fifth International Sanitary Conference in Washington DC in 1881. The purpose was to develop international health policies based upon information gleaned from reports on the state of health in the participant countries, with a focus on containing the spread of disease in their port cities. Ten of the eleven conferences were all held in Europe: Paris, France (1851); Paris, France (1859); Istanbul, Turkey (1866); Vienna, Austria (1874); Washington DC., USA (1881); Rome, Italy (1885); Rome, Italy (1892); Dresden, Germany (1883); Paris, France (1894); Venice, Italy (1897); Paris, France (1903). See International Sanitary Conferences, available at Harvard University Library – Open Collections Program http://ocp.hul.harvard.edu/contagion/sanitaryconferences.html

[7] Clyde Kluckhohn (1905-1960), was professor of anthropology at Harvard University. He contributed to anthropology especially by his theories of culture and cultural values. Kluckhohn’s basic ideas about culture are contained in Mirror for Man, which won the McGraw-Hill prize for the best popular work in science in 1949.