Gender relations and the Wayúu in La Guajira 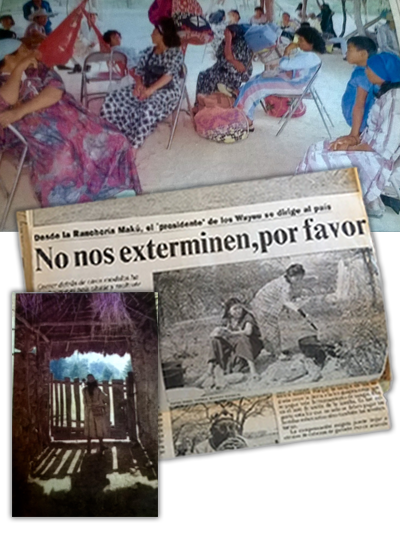 Manuel Zapata Olivella wrote Los pasos del indio to convey the impact of his ethnographic work with the Wayúu people in the Guajira peninsula.  The theatrical piece appeared in 1961, staged by the theater group El Búho.  Los pasos del indio reflects testimonies gathered by Zapata Olivella, the anthropologist, in his field work in the ethnic Wayúu community.  His research and the play explore themes such as marriage, gender relations, and the roles of women in contrast to the hegemonic legal system of Colombia.[1]

Gender relations in Latin America, typically conform to the traditional interpretation of Latin America as a place of “macho” culture.  Chauvinism has been described as a cultural pattern that encompasses all the features understood as “truly masculine," an especially apt description in the context of Latin America.  Every culture builds its specific discourses on gender, and its ideologies are represented through everyday speech, media, music, popular tales, and laws.[2]  The representations of "male" and "female" function as a set of pipelines, learned and reinforced culturally while constructing the content of gender roles in society.[3]  In Wayúu communities, these gender dynamics are evident in psychological relations and economic partnerships.  They are also manifested in the spatial configuration of the village, in the management of domestic issues, and in the ritual life of the community.  These specific oral interviews conducted in 1985 by Manuel Zapata Olivella focus on Wayúu culture and form part of the Grupo etnográfico Collection of the Manuel Zapata Olivella Papers in Vanderbilt University Libraries’ Special Collection.[4]

Wayúu interviews demonstrate that indigenous women from the region of La Guajira share with men the responsibilities of providing food for their families and transmitting Wayúu cultural traditions to their children. (85-5-C)  The interviews also convey a model of sexuality that includes feelings—such as jealousy—that emerge in the course of social life, in addition to infidelity, alterity representations, and a range of sexual practices. (85-7-C)

In traditional Wayúu cosmology, the creation myth relates the story of Wayúu origins and concepts of community and its representation of fertility provides the basis for women’s stature in Wayúu society.  Since the Wayúu are descended from the female line, the culture is matriarchal in character.  It is through the woman and her clan that society is structured, creating ties of matrilineal bondage.  Social status is determined by the mother, and the children inherit her family surname.  The husband’s family does maintain important relations of solidarity and reciprocity.[5]  Wayúu forms of social organization are woven together through the transmission and incorporation of traditions from generation to generation, enabling the consolidation of an identity noted for their roles in the cultural, social, and psychological structure of the community.  This is because they remain, largely, within the bounds of the village. (85-9-C)  Women are responsible for fostering cultural harmony in the Wayúu community. (85-12-C)

Most relationships within Wayúu society reflect the matrilineal customs in the cycle of life.[6]  During their youth, both women and men learn how to forge their character and discipline by observing and learning from the myriad tasks performed at the rancherías.  In their adulthood, they perform the rituals of marriage and procreation that sustain their culture. The role of women is not limited to domestic work and procreation.  Wayúu women are also important in the culminating ritual of the cycle of life, when preparing their dead for physical burial, and during the subsequent exhumation and reburial of their remains.

The misconception that indigenous people tend toward misogynist behavior and relegate women to an inferior role in the community is still very common today in Latin America.  This obviously does not reflect the reality of a large number of indigenous societies, as we see clearly in Zapata Olivella’s work on the Wayúu and their social relations. (85-18-C)  Women are key to maintaining structure and cohesion within Wayúu society.  They protect Wayúu culture and tradition.  The most important rites for the conservation of tradition take place during a girl’s transition from childhood to adolescence.  A ceremony involving traditional drinks is part of a woman’s  rite of passage into adulthood as they  adjust to new responsibilities and behaviors in this new life stage.  All this happens in order to maintain their prestige and respect in the community, and to achieve a good marriage to ensure the preservation of the clan in the future.[7]

In Wayúu social organization, there is also a division of roles between men and women without establishing that one is superior to the other.  Both have their undeniable and unrestricted value and there is a clear awareness that the whole group depends on the activities developed by both women and men.[8]  To work well, the community requires that men and women perform their various activities, all of which are equally important. (85-19-C)  The wedding celebration, for example, carries great meaning as the consummate sign of prestige within Wayúu culture.  Matrimonial alliances demonstrate the stature of the families involved, and help accumulate resources for family members.  In turn, the rituals performed during the wedding celebration underscore the role of women, the strong influence of the matrilineal family, and their impact in making decisions that sustain the clan.

It is striking that the political power of Wayúu women is not only exercised indirectly.  Women’s political power operates in a direct way, as in the case of the female leader—“the president”—of the Wayúu in the Ranchería Makú during the 1980’s in the Guajira peninsula.[9] (9)  In many cases, men make crucial community decisions, but women also play an influential political role.[10]  Power is also exercised on the "backstage" of the community, during the everyday conversations and often in casual encounters.  The ethnographic testimonies gathered by anthropologist Zapata Olivella shows that Wayúu women are heavily involved in community issues.